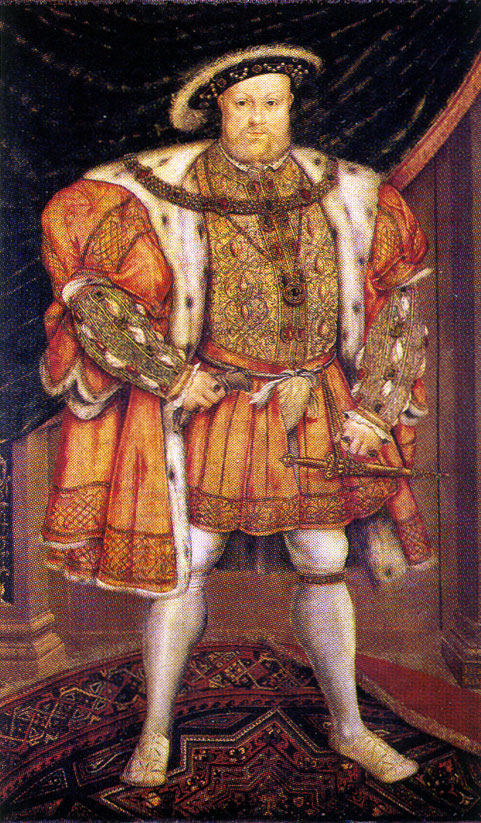 As I walked to Church this morning I was composing this blog post in my mind and reflecting on the influence Henry VIII still holds over this country.  I think of all the British monarchs he must be the most iconic, easily recognizable, and, for me at least, ‘pre- and post-Tudor age’ is an easy way of fixing people and events to a timeline! It certainly is an era that has left it’s mark on this nation, both physically and spiritually.

A couple of months ago I shared the visit we made to Portsmouth to see the fascinating salvaged remains of Henry VIII’s flagship, The Mary Rose, and all the amazing artifacts that had been recovered from the mud at the bottom of the Solent after nearly 500 years. This past week I’ve been fortunate enough to enjoy two days out with friends.  The first was a day at Waverley Abbey House, a Christian conference centre.  In the grounds of the Georgian mansion are the substantial ruins of Waverley Abbey – a victim of the Dissolution of the Monasteries ordered by Henry VIII back in 1536. Founded in 1128 the Abbey was the first Cistercian house to be established in Britain and by the time the monarchy broke away from the Pope and the Catholic Church it was a large, busy, monastery.

No ruins in sight on my second day out with a link to Henry VIII!  This was a day looking around the Palace of Hampton Court and it’s beautiful gardens next to the River Thames. Henry ‘procured’ the original Palace built by his sometime righthand man, Cardinal Wolsey, when Wolsey failed to secure permission from Rome for a divorce between Henry and his wife of twenty years, Katherine of Aragon.  The Palace was re-modelled by William III and Mary in the early 1700’s but, thankfully for us, they ran out of money before completely demolishing the Tudor buildings!  There is so much history to be seen and as a ‘museum’ it works really well – the huge complex of Tudor kitchens really helps to give an idea of the scale of the Tudor Court.  If you’ve seen the film of ‘The Other Boleyn Girl’ you may recall the scenes with courtiers hanging around in a large hall busy watching, scheming and falling in and out of favour.  The Great Hall in Hampton Court is that place. Enormous tapestries hang from the walls depicting scenes from the story of Abraham.  These were commissioned by Henry VIII and made by the finest weavers in Belgium.  Each tapestry was full of pure silver and gold threads which must have looked quite spectacular to visitors of the Royal Court.  I have heard it said that these tapestries, although dulled by five centuries of exposure to light and air, are more precious than the crown jewels, truly priceless!

As I walked to Church this morning I was composing this blog post in my mind and reflecting on the influence of Henry VIII.  I think of all the British monarchs he must be the most iconic, most easily recognizable, and, for me at least, pre- and post- Tudor age is an easy way of fixing people and events to a timeline! It certainly was an age that has left it’s mark on this nation, both physically and spiritually.

Hampton Court Palace is not just a museum (it was originally opened to the public on the orders of Queen Victoria), a suite of rooms are home to the Royal School of Needlework. Imagine signing up for a class with them, walking through the Palace and then having the privilege of gazing through their third floor windows to the gardens and river beyond?

My day at Waverley Abbey House was lovely.  The staff offer a warm welcome to all visitors and the conference, dining and sitting rooms are comfortable and homely despite the grandness of the building.  It’s fun climbing the broad staircase to the study room and sitting in a room with huge windows looking out across the lake and parkland.  We were gathered for some teaching on Chapter 1 of John’s Gospel – my all time ‘tingle factor’ passage in the Bible!

In the beginning was the Word, and the Word was with God, and the Word was God.  He was with God in the beginning.  Through Him all things were made; without Him nothing was made that has been made.  In Him was life, and that life was the light of men.  The light shines in the darkness, but the darkness has not understood it… The Word became flesh and lived for a while among us.

It was great to spend time reading and learning.  There are so many links with the Gospel telling of Jesus’ life and recorded events and prophecies from the Old Testament – most would have resonated with the first Century Jews who witnessed events first hand but for us 21st Century ‘gentiles’ a lot of guidance is needed to make the connections.  It’s worth seeking out good Bible teaching, a Bible with study notes and reading the books of the Old Testament as well as those of the New Testament!

I’m enjoying a sunny Sunday 🙂  Hope you too are aware of His blessings today.

Thank you for reading my blog post. I do appreciate you taking time to leave a comment, creating a conversation with our worldwide patchwork and quilting community. Leave a comment below. Cancel reply