A post about making bunting has been on my mind since April!  Now Autumn is approaching in the Northern Hemisphere and bunting doesn’t seem entirely topical but I’d like to share these thoughts and experiences before all memories of flags fluttering in a summer breeze are utterly lost.  In my next post I will explain the two methods I have used to make bunting flags and share a few tips and pitfalls.   Before the tutorial in Part 2 just a little bit of information about the origins of bunting and a snip-it of my personal bunting history (how weird does that sound?).

Flags and banners have been a part of military history for thousands of years so it’s not surprising to learn that bunting was being used by European navies as a means of sending signals as far back as the early 17th century.

The flags were made from a durable, lightweight worsted wool fabric known then as ‘butline’.  So I guess over the following centuries the word ‘bunting’ came about and was used to describe the rows of flags rather than the fabric with which they were made.  Of course, rows of flags are not exclusive to European battle fleets! 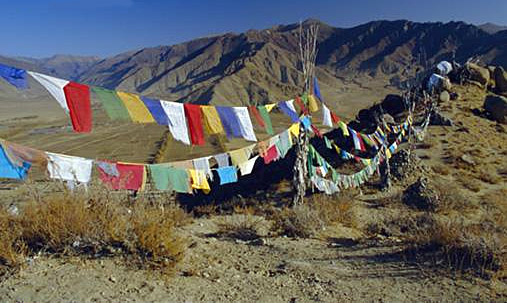 The prayer flags streaming across valleys in the Himalayan mountains came to my to mind; they are a cultural tradition dating back to ‘Bon’ a religion that preceded Buddhism.  There must be many other examples of rows of flags being used in different cultures and through the ages from all around the world. 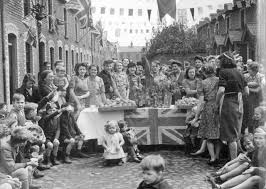 Bunting has become part of celebration. Remember seeing photos of the flags strung across streets of terraced houses for post-war street parties?  I recall having bunting around our front door in celebration of the Queen’s Silver Jubilee in 1977. Since then, the flag colours have been less influenced by patriotism and bunting can now be a feature indoors as well as out.  In 2012 though, patriotic red, white and blue bunting was out in force in the UK.  We had the Queen’s Diamond Jubilee to celebrate and we were hosting the Olympic Games.

With the Diamond Jubilee I went into red, white and blue bunting mode, hung a string outside and sold some more to my generous neighbours.  Unfortunately the ‘summer’ of 2012 was very, very wet!  The bunting flags got soaked many times over and the colours faded rapidly…

Sadly everyone got drenched watching the Jubilee River Pageant in May.  Thankfully by August the skies had just about run out of rain and most of the Olympic events took place in the dry!

A year or two before 2012 I’d formed a dream based on my new found passion for patchwork and quilting: I’d like to sell fabric, maybe even run a patchwork and quilting shop.  But I had a critical problem: no capital…  I thought maybe I could make and sell things to accumulate some funds.  I started small with bunting: having successfully made some for my daughters birthday party.  I made a lot of bunting and managed to sell some at school fairs and the like but sadly didn’t make much of a profit.

I suspect part of the reason I haven’t gained much of a profit making and selling bunting is that I’ve tended to err on the perfectionist side of bunting making!  I had to revise this approach when our daughter and future son-in-law announced their engagement; plans for the wedding day began and I was pleased to be asked to make ‘some’ bunting.  Daughter had the bright idea of using cheap poly-cotton bedding as a source of fabrics and we bought new from ASDA and secondhand from charity shops.  Did you know a single bed sheet will make around 60 double-sided bunting flags?

I don’t know how many flags I cut out and stitched but I calculated I’d made around 150 metres of bunting!  We decorated their Church and the reception hall and there were a few lengths left over (better safe than sorry!).

Happy memories!  Next time I’ll share both my perfectionist and quick methods for making bunting!